National Windscreens has raised £2,000 for Great Western Air Ambulance Charity (GWAAC). The contact centre team in Bristol has been running numerous fundraising events and activities for the past 18 months and recently handed over the cheque to GWAAC. 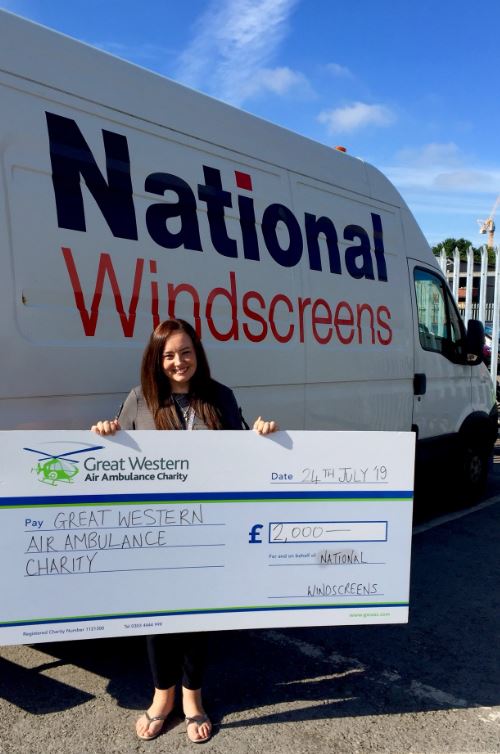 National Windscreens is incredibly passionate about raising money for local charities and each year the contact centre chooses a charity of the year to support. This initiative began in 2017, and previous to this the company raised over £1,000 for St. Peter’s Hospice.

Working 365 days a year, GWAAC provides emergency care across the west of the country to people who are in such a fragile condition that they require the specialist critical care team at the scene of an accident or medical incident. Though part of the regional 999 response service, working closely with the NHS, GWAAC are a charity entirely funded by local people, and need to raise over £3 million a year to remain operational.

Leigh Weeks, customer service advisor at National Windscreens, also known internally as the ‘charity champion’, has been proudly leading the fundraising efforts for GWAAC. This particular charity was chosen because National Windscreens believes they do a fantastic job at saving lives on a daily basis. As well as this, a family member of one of the contact centre staff had experienced the support of the charity first-hand when suffering a cardiac arrest whilst playing football; the air ambulance personnel treated him at the scene and air lifted him to the BRI hospital in central Bristol.

National Windscreens even extended the initial 12 month fundraising term for GWAAC to 18 months, as they felt so passionate about the work they carry out. The 18 month initiative included a variety of activities, including: dress down days, tuck shops, sweepstakes, raffles and cake sales.

“Leigh has been amazing and has arranged monthly dress down days and ensured a tuck shop was stocked with all the team’s favourite treats. The contact centre have been most generous and have raised £2,000.00 to go to this very worthy cause. On behalf of the directors, I would like to sincerely thank Leigh and the contact centre for their charitable efforts. The team have voted and will be supporting mental health charity, Bristol Mind, in 2020.

GWAAC thanked National Windscreens for its support and hard work and were extremely grateful for the donation. GWAAC are an incredible charity, you can keep them flying by donating today!