Five National Windscreens staff members are taking part in the annual Pedal for Scotland cycle ride to raise money for charities supporting two of their colleagues.

Andy Rae, director of operations for Scotland, will be joined by four National Windscreens technicians from Scotland in the 45-mile charity ride between Glasgow and Edinburgh on September 10th.

He says: “One of the company’s regional directors in Dumfries, Robbie Cloy, is currently on dialysis three times a week and is waiting for a kidney transplant so we wanted to support him and raise awareness about this disease and the devastating effects it can have on people.

“We can all see the massive impact the regular visits to hospital are having on Robbie and so we are cycling in aid of the National Kidney Federation which campaigns for improvements to renal provision and treatment as well as providing national patient support services.

“The other charity we are supporting is Epilepsy Scotland because regional director Evelyn Newlands son Kevin sadly passed away last year due to this condition and the charity has helped his family to deal with the loss. In his memory, we are taking Kevin’s bike on the charity cycle ride.

“I’m sure many customers will want to support our fund-raising efforts which we hope will make a real difference to the many other people diagnosed in the UK every year with kidney disease and epilepsy,” he added.

Find out more about Pedal for Scotland here and you can support the team on JustGiving.

Sponsorship forms are also available at all National Windscreens fitting and calibration centres in Scotland.

Pictured top are Bruce Robertson, Andy Rae and Steven Wynn getting ready for the charity cycle ride while below are Calum Wilson (left) and Robert Innes getting behind Epilepsy Scotland. 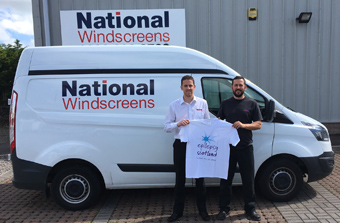