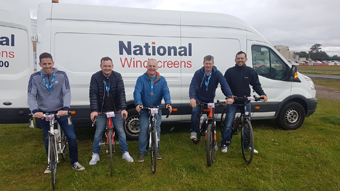 Five National Windscreens staff members have raised more than £3,500 for two charities by taking part in the annual Pedal for Scotland event.

The funds from the 45-mile Glasgow to Edinburgh cycle ride completed by Andy Rae, Bruce Robertson, Steven Wynn, Robert Innes and Calum Wilson, will now be divided between Epilepsy Scotland and the National Kidney Federation.

The National Kidney Federation campaigns for improvements to renal provision and treatment as well as providing national patient services and is supporting one of National Windscreens regional directors in Dumfries, Robbie Cloy, who is currently on dialysis three times a week and waiting for a kidney transplant.

Pete Revell, head of fundraising NKF – Kidney Patients UK, said: “The National Kidney Federation would like to thank National Windscreens for their fantastic fundraising and especially thank all those who took part in the cycle ride.

Kerry Reich, community and event fundraiser for Epilepsy Scotland, said: “We were delighted to have National Windscreens represent us during the 2017 Pedal for Scotland event! They all received great support from everyone at the company and have raised a fantastic amount. Huge thanks to everyone who sponsored and supported them through the tough challenge of cycling 45 miles from Glasgow to Edinburgh.

“Well done guys, we really appreciate all the hard work that went in to achieving this. We would not be able to continue supporting the 55,000 people affected by epilepsy in Scotland without our supporters,” she added.

Andy Rae, regional director at National Windscreens, said: “We were inspired to take part in Pedal for Scotland after seeing the massive impact regular visits to hospital were having on Robbie and we also wanted to support Evelyn after her sad loss. In Kevin’s memory, we also took his bike on the charity cycle ride.

“I would like to thank everyone who has supported our efforts and assure them that the funds raised will make a real difference to the many people diagnosed in the UK every year with kidney disease and epilepsy,” he added.