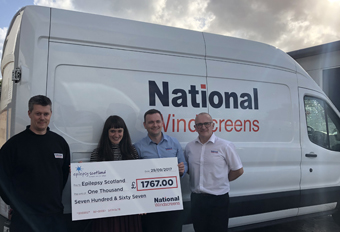 National Windscreens has handed over a cheque for £1,767 to the charity Epilepsy Scotland – half of the proceeds raised by five staff members who successfully completed the Pedal for Scotland cycle ride.

Three of the National Windscreens staff members who took part in the charity event – Bruce Robertson, Steven Wynn and Andy Rae – are pictured handing over the funds to Kerry Reich, community and event fundraiser for Epilepsy Scotland.

Kerry said: “Well done guys, we really appreciate all the hard work that went into achieving this. We would not be able to continue supporting the 55,000 people affected by epilepsy in Scotland without our supporters.”

The other £1,767 raised is being donated to the National Kidney Federation.