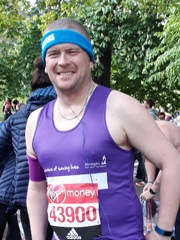 This was only the second time that Alan, 42, has completed a marathon, his first being in Bristol two years ago, and he enjoyed the experience so much that he has already got his name down to take part again in 2018!

Alan was disappointed with his finishing time of just over five hours saying: “The weather was very hot and, even though I put sunscreen on the top of my head, I didn’t think about my shoulders because it was cloudy when I set off.

“Unfortunately, I ended up with some sunburn on my shoulders which hampered my finishing time. However, I did thoroughly enjoy the experience and have already entered the ballot for a place in next year’s event when I will be aiming for a far better time,” he added.

Alan took up running when he gave up smoking as a way to keep himself motivated. He says: “Running is such a great way to relieve stress and the fact taking part in a marathon can also help so many charities makes it even more worthwhile.”

Alan is still accepting donations for his chosen charity, Meningitis Research Foundation, at his JustGiving page.

This charity has been supported by Alan for many years and has already benefited from funds raised at dragon boat races and two half marathons he has completed.